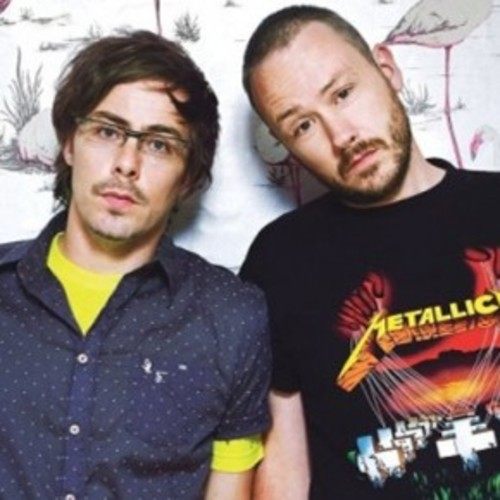 Everybody knows that dance music is in trouble. The DJs are too old, the clubs too lazy, the promoters too greedy and the beats too tired. But everybody also knows that they still want to dance. They just need music that surprises and excites and busts loose from house music’s ever-decreasing circles. Music, in short, like Basement Jaxx’s third album, Kish Kash.

Kish Kash isn’t a traditional dance record but it’s one you can dance to. A riotous collision of classic songwriting and writhing rhythms, it springs from both the electro-punk ferocity of “Where’s Your Head At” and “Get Me Off” and the more reflective moments in Basement Jaxx’s back catalogue, but never the middle ground. Featuring an array of guests, from Dizzee Rascal to Siouxsie Sioux, it demonstrates that Basement Jaxx are so far ahead of the pack they’ve forgotten what the pack looks like.

Felix Buxton and Simon Ratcliffe met over an obscure Masters At Work record in Brixton, south London in 1994. Choosing the name Basement Jaxx (Simon had a studio in a basement and the music jacked), their initial ambitions were humble: to put on great parties and produce records, which emulated their heroes on the US house scene.

Over the course of several EPs on their Atlantic Jaxx label, however, a more idiosyncratic, homegrown sound emerged in the edge-of-panic squeal of “Fly Life” and the bassbin psychosis of “Set Yo’ Body Free”. Their 1997 Atlantic Jaxx compilation was informed by soul, jazz, reggae, house and samba but also the more raucous British traditions of punk and rave. In Armand Van Helden’s charming assessment, they took house music and "fucked it up the ass".

Signing to Astralwerks in the US (and XL in the UK), they released their debut album, Remedy, in 1999. An instant classic, it spun ragga, disco and R&B into anarchic new mutations and yielded the hit singles “Red Alert”, “Rendez-Vu”, “Jump And Shout” and “Bingo Bango”.

After touring the world Basement Jaxx hosted an intense, intimate club in a Brixton pub and called it Rooty. That became the title of their second album in 2001. Fiercer and rowdier than its predecessor, it featured “Romeo”, “Jus 1 Kiss”, “Get Me Off” and, most startling of all, the Gary Numan-sampling punk garage blitzkrieg “Where’s Your Head At”. The Traktor-directed video, which computer-grafted Felix and Simon’s faces onto rioting monkeys was the stuff of particularly entertaining nightmares, not to mention an MTV Europe statuette to add to their Brit Award (Best Dance Act 2002).

Kish Kash was born in the aftermath of another lengthy tour. Exhausted and homesick, Felix and Simon settled into their new Brixton studio and set about developing a fresh approach, less reliant on grooves and samples and more focused on songwriting, often starting with just a voice and guitar. "We kind of went back to school," says Felix. We got this new studio and had to learn how to use it." Adds Simon: "There was a greater sense that we didn’t know what we were doing but it was more enjoyable than before."
The recording process took place between March 2002 and August 2003. In the meantime they released the low-profile experimental Junction EP and remixed Missy Elliott, DJ Sneak and Justin Timberlake. The remixes were easy – the tricky bit was deciding where to go next.

In the past, the pair had taken some of their cues from their dancefloor contemporaries but not this time. "We were listening to what other people were doing and realizing it was all pretty stagnant and uninspiring," says Simon. "There was nothing to look up to in a way. We had to do something new." The variety of records they enjoyed while making Kish Kash had a less direct influence: Radiohead, The Neptunes, Timbaland and contorted art-metallers System Of A Down.

Kish Kash has an eclectic cast of characters, ranging from complete unknowns to cult heroes to household names, and from teenagers to 70-year-olds. "There’s no ageism on this record," Felix assures with a grin.Dizzee Rascal, the East Ender who’s turned UK garage/rap on its head, performs a manic turn on “Lucky Star”, to the unlikely Bellrays’ Lisa Vennum-Kekaula from California to sing “Plug It In” but it didn’t work out so they wrote a new song for her on the spot, the adrenalized cyber-Motown stomp of “Good Luck”. "We thought we’d better write a song otherwise we’ve wasted all our money," says Felix sensibly. Strings on “Good Luck” came courtesy of seasoned arranger Will Malone (Massive Attack, The Verve, Dido), who also scored the melancholic “If I Ever Recover”.

“Plug It In” was finally completed thanks to a chance encounter with former *NSYNC member JC Chasez, who was in town looking for producers for his own album. His classic American R&B falsetto sparks off frantic rave stabs and grinding drums. Punk heroine Siouxsie Sioux was always first choice for “Cish Cash”, which once again makes sense of that "punk garage" tag. Simon had been a fan ever since he was nine, when he bought Siouxsie & The Banshee’s Happy House single and found, to his prepubescent delight, that Siouxsie sang "fuck off" on the B-side. "She has an individuality that’s sorely lacking in these days of blandness," says Felix.
New York-based singer-songwriter Me’Shell Ndegéocello popped in amid a UK tour to record “Right Here’s The Spot’s” horny house lurch and the duvet-soft final track, Feels Like Home, which was the very first song written for the album. "On the second day she felt ill and we had to make her a bed in the vocal booth," reports Simon.
The other songs are equally full of personality. The finger-popping “Supersonic” features 65-year-old Totlyn Jackson, who once traveled around Jamaica with John F Kennedy. Phoebe Tolmer fronts “Tonight”, a song originally called Slow Spanish because, um, "it’s Spanish and it’s really slow." Just days before the album was finished Simon received a visit from an 18-year-old singer called Millie. His parents had met hers at a party and given them his number so she could get some advice on the music industry. She did better than that and ended up singing on “Hot And Cold”. Elsewhere, Chicago jazz artist Allonymous, 70-year-old Brixton resident Joe Benjamin and "some bloke" called Anthony complete the cast of (almost) thousands.
Basement Jaxx records have always thrived on a sense of organized chaos, voices and sounds and ideas pingponging wildly around the mix. Kish Kash is simultaneously the most extreme and most cohesive example of the mentality. "I think this album sits together better than our other ones," says Simon. "They were a bit disjointed."

Felix sums up Kish Kash’s ethos thus: "We’re in such an analytical, media aware, emotionally aware society. It’s getting more complex so ultimately the thing to do is to make something simple. When nothing makes sense you just want music for one moment to hold everything together."