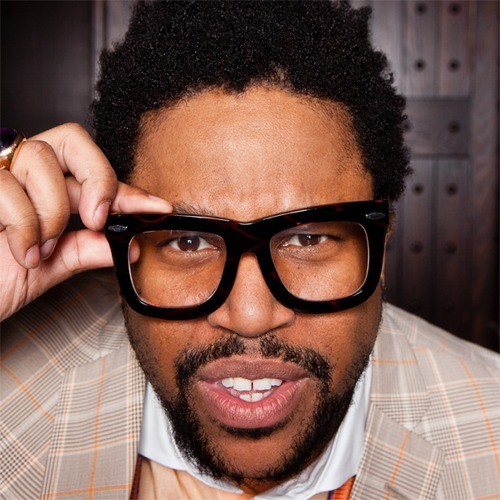 Dance music is lucky to have people like Felix Da Housecat. He is one of those rare, charisma­oozing characters, whose musical and mental eccentricity come from a genuine place. He’s never afraid to take a risk to reach new ground. It’s this blend of qualities that has kept him in such high reverence in the electronic field for two decades now, and which has ensured that his music has been a consistently captivating force. An ever­moving target, his various incarnations have seen him morph from resolute acid and techno warrior to avant­garde nu­skool...[read more]electro­ disco pioneer to the man who gave one of the world’s most famous rappers a new lease of house­infused life long before major labels were putting every urban artist on their books overanemic 4/4 beats.“My dad played sax and he got me onto clarinet” he recalls of his beginnings in making  music, “so it was more of a discipline thing. It was never like, I was this passionate kid who wanted to be a… superstar. Or a superstar DJ, or a rock ‘n’ roll star. I was quite shy in school.”

First seduced by electronic music when house music first emerged in his native Chicago in 1984,the young Felix soon found himself getting caught up in a musical paradigm shift that fostered a lifelong obsession and helped to bring him into his shell. “It was like a culture movement. So everything I heard on the radio ­ from Farley ‘Jackmaster’ Funk to Mike ‘Hitman’ Wilson ­ that was the sound I was exposed to. Coming from a family of music, I was able to replay and recreate that stuff.”

But it was too late for classical training to keep a hold on this burgeoning young talent and dance music aficionado. Da Housecat took over.
Felix began re-releasing music back in 1993. He landed, as a cat does, on his feet with some of his earliest productions picked up by seminal progressive and techno imprints Guerilla andBush. “When the people started getting into my sound, that’s when I started taking it serious”he explains.
He grew to become one of techno’s most sought­after names, with a sound influenced heavily by collaborator, mentor and acid house inventor DJ Pierre’s ‘wild­pitch’ style and drawing as much on the raucous bite of acid as it did on the intensity of techno. He was catapulted from the overground into the wider dance music consciousness at the start of the millennium when he reinvented himself as a purveyor of future retro, high­camp grooves with his ‘80s­inspired album Kittenz (And Thee Glitz).Club and crossover hit Silver Screen Shower Scene particularly, with its kitsch Miss Kittin vocals and raucous sound, remains a stone­cold classic to this day.He survived unwittingly spearheading an entire new genre with that album ­ “I just hate the word electroclash and don’t want to be affiliated with it”, he says today ­ but continued unfazed throughout the noughties to bring the world more of the magical music that lives insidehis head. Albums Virgo Blaktro & The Movie Disco andHe Was King received critical acclaim before he made history and released his next LP, Son Of Analog, as a free Mixmag covermount CD. Collaborating with the man then known as P. Diddy in the interim (2006) on the groundbreaking Jack U was just another move that was way ahead of its time.

But despite all this success, an increasingly wild lifestyle (including a fierce mezcal habit) combined with the pressures of unrequited hyperbole forced Felix to hit the reset button a few years back.  “I became sober and got in touch with my spirit, I saw everything clear. Some promoters book me because they think they are getting the Mezcalateer. Some are afraid of the Mezcalateer. Some find I’m sober and will try to test me by offering me shots but I fight them off. I am Thee Former Mezcalateer. Retired. I found myself literally dancingwith the devil. No joke. The four years off was due to personal life, spirit, booze, you name it. I had to find my way back. I survived and I went through my 9 lives over 10 times.”
The devil’s loss is the world’s gain: Felix is back in a big way, brimming with hunger and passion for music once again, and some incredibly hot new material. Returning with a slew of newmaterial in 2013 via his label No Shame/Rude Photo, his rampant electro/disco concoctions will pave the way for a hotly anticipated new album later in the year. On top of all this fresh new music, a huge remix for Katy B is on the way, plus a global tour, a live  BBC Radio 1 Essential Mix and his own signature headphones. This is the year that Felix Da Housecat reclaims his position amongst the upper echelons of dance music